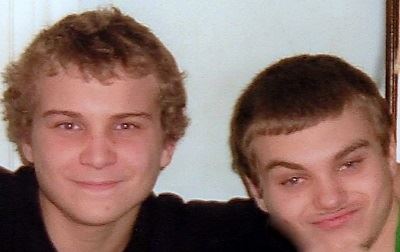 On Wednesday, April 15, 2009, shortly after midnight, Mason Jones (16) and Joshua Compton (17), were shot and killed in the doorway of Joshua's home on Rowland Avenue in the South Norfolk section of Chesapeake.

Two people came to the door and asked to speak to Joshua. Both victims talked with the men in the front doorway for approximately 10 minutes before being shot multiple times. After the shooting, the suspects ran and got into a car with a third person. Joshua Compton's mother was in the home at the time of the shooting, but was unable to identify the shooter.

Suspect Description: The suspect is described as a stocky black man with squinted eyes, about 5 feet 8 inches tall, with a wide face wearing a white cap or bandanna that covered his ears and what looked like a dark-blue feather down coat.

The case remains unsolved. There is a reward of up to $1000 if your information leads to an arrest. You can remain anonymous. For a complete list of unsolved homicides in Chesapeake, visit Cold Case Homicide Investigations.

What you can do if you have any information:

If you have any information regarding an unsolved case, your tip can be forwarded to the Crimes Against Persons Squad. You can remain anonymous.