Chesapeake's history dates back much further than 1963 when Norfolk County and the City of South Norfolk merged to create Chesapeake. The city's landmarks and communities have a long, varied and interesting history. The first English settlement began around 1620 along the banks of the Elizabeth River. Norfolk County's founding dates back to 1636. 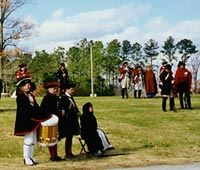 In the early months of the Revolutionary War, in December 1775, British Royal governor Lord Dunmore moved his forces from Norfolk to Great Bridge where his army entrenched itself to await the arrival of American forces. The two armies clashed on December 9, 1775, in the historic Battle of Great Bridge, just a few hundred yards from where the Chesapeake Municipal Center complex stands today. In a brief but decisive battle, the Americans routed Lord Dunmore's forces which fled to Norfolk and later abandoned that city.

In 1793, work began on the Dismal Swamp Canal, an idea first envisioned by George Washington in 1763, when he visited the swamp. Because the canal was dug completely by hand, progress was slow and expenses high. The canal finally opened in 1805, but experienced hard times over the years. Completion of the Albermarle and Chesapeake Canal in 1858 dealt a serious blow to the Dismal Swamp Canal. Now on the National Register of Historic Places, the Dismal Swamp Canal is the oldest operating artificial waterway in the country. Both canals are operated by the Army Corps of Engineers and form part of the Atlantic Intracoastal Waterway.

The first local encounter of the Civil War occurred at Sewell's Point in May 1861. Although no battles were fought in the Chesapeake area, Union troops occupied and laid waste to much of the land. When the war ended, Norfolk County took advantage of its abundant natural resources. Its coastal location, miles of riverfront and deep water harbors and the fertile, level farmland allowed county residents to recover quickly from the wartime destruction, moving without hesitation into the 20th Century.

While most of the area retained its rural atmosphere through the early 1900s, the northern section near the growing City of Norfolk began to develop as the suburb of South Norfolk. By 1900, South Norfolk had its own waterworks, public schools and a post office. Two rail lines spurred rapid growth, allowing South Norfolk to incorporate as an independent town in 1919 and a city of the first class, independent of Norfolk County, in 1950.

The Creation of the City of Chesapeake

In the fall of 1961, city and county officials met to discuss the feasibility of a merger. After several weeks of negotiations, both governing bodies approved a merger agreement on December 22, 1961. On February 13, 1962, citizens of both communities turned out in near-record numbers for a special election and approved the merger. Later that year, in June, the citizens voted again and selected the name "Chesapeake" for the new city.

On January 2, 1963, the Chesapeake City Council, with five members from South Norfolk and five from Norfolk County, met for the first time. These men set the stage for Chesapeake's growth and development and determined how to provide services for the new city's residents.

During the 1960s and 1970s, the young city began to develop a comprehensive network of city services, including police and fire protection, schools, libraries, parks and recreation, health, utilities, land use planning, transportation network and more. Planning for the city's future was a key need. Chesapeake's 353 square miles offered much opportunity for development.

Much of this development began to occur during the 1980s, both residential and industrial. To help keep pace with this growth, community centers, schools, a new social services building, City Hall and court building were constructed during this period. Voters approved a $30 million road bond referendum in 1986, and in 1988 approved bonds for additional school and library construction.

Increased economic development efforts also met with much success in the 1980s. One of the area's first Japanese-owned companies, Sumitomo, moved to Chesapeake in 1988. Sumitomo was soon followed by Mitsubishi Kasei, which now operates three plants in Chesapeake. Other companies, such as Household Finance Corporation and QVC, continue to be attracted by Chesapeake's labor force, excellent location and high quality of life. Find out more about Chesapeake's Economic Development by visiting the Chesapeake Economic Development home page.

Today, Chesapeake is a unique blend of rural and urban centers, providing its citizens with excellent schools, recreational and cultural facilities and strong municipal leadership as the city continues to grow, meeting the challenges awaiting it in the 21st century.

The Historical Services division of Parks, Recreation and Tourism was created in 2021. Its mission is to raise awareness, interpret and preserve the city's vibrant history through maintaining city-owned cemeteries, memorials and other historical assets, as well as organizing special events, multimedia, educational programs, tours, interpretive signage, and other exhibits. Visit Chesapeake Parks, Recreation and Tourism's Historical Services to learn more.