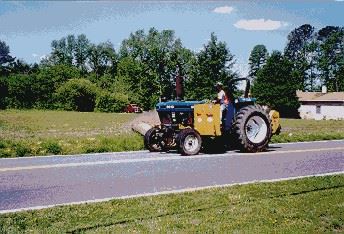 Public Works maintains the mowing of public right-of-ways along City shoulders and medians. Chesapeake is responsible for 720 shoulder-miles of mowing along roadways and for 320 acres of medians and open areas. Public Works currently administers a mowing contract with two companies to mow certain right-of-way areas 10 to 14 days and shoulders are mowed every 21 to 28 days. The mowing season ends in December.

Beginning in 2009, in an effort to help reduce taxpayer expenses, the City has partnered with the Sheriff's Department Inmate Program to supplement the mowing contract.

Interstate roads and on/off ramps are maintained by the Virginia Department of Transportation. Mowing of City park grounds and public building grounds is handled by the Building and Grounds Division of our Parks, Recreation and Tourism Department.

Further questions should be directed to the Customer Contact Center at 757-382-CITY (2489).